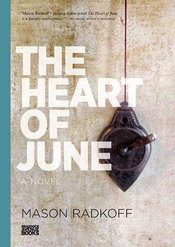 Heart of June: A Novel by Mason Radkoff

SKU:
$16.95
$16.95
Unavailable
per item
SYNOPSIS:
Walter Farnham is on a mission. Only he doesn’t know it. Living above the garage of his former wife and her new husband, Walt has never been one to finish things, not even a divorce. In fact, the closest he’s come to a steady anything is as caretaker for Hardwick, the grand old family home of the heiress, Miss June Bonwell Creighton.
Although Miss June is a stern mistress, Walt responds to her demands with good-natured indulgence. It was Miss June, after all, who took the motherless boy under her wing so many years ago. But now, well into her eighties, Miss June is running out of time to make Walt into the son she never had . . . and for Walt to show her that he is the man she believes him to be.
Bonded by a routine of affectionate banter and soft chiding, neither character is prepared to acknowledge that their relationship conceals a deeper problem—a shared reluctance to fully embrace the present, Walt through systematically refusing to complete anything, and Miss June by residing in memories of her lost love and lost life . . . until, that is, the young and accomplished Gwen Thompson steps into their world and irrevocably alters the carefully constructed pas de deux that is life at Hardwick.
Mason Radkoff has brought us a book brimming with wit and charm and filled with characters so engaging you’ll need to pinch yourself to realize you haven’t actually met them. A story filled with poignant encounters and madcap adventures, The Heart of June traces the surprising relationship between a wayward handyman and a crusty octogenarian as they discover together that what really matters in life was right in front of them all along.
This generous and brightly imagined book will have you laughing and crying and smiling ear to ear. A story about the debts and obligations we owe one another, and about the surprising satisfaction of settling them, The Heart of June is an unforgettable story about the transformative power of loyalty and love.
Published by Braddock Avenue Books
Author Info:
Mason Radkoff lives and writes in Pittsburgh, Pennsylvania. Before becoming a novelist, he restored old houses, and still pounds nails on occasion. He does his best thinking with tools in his hands.