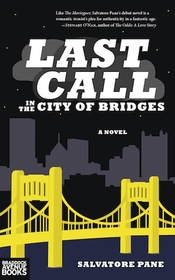 Last Call in the City of Bridges: A Novel by Salvatore Pane

SKU:
$16.00
$16.00
Unavailable
per item
Synopsis:
“It was supposed to be the greatest night of our lives.”
It’s the eve of the Obama election.  Change is in the air and hope is running high.  And for twenty-five-year-old, self-proclaimed cool man Michael Bishop, so is the alcohol and the bluster.  Working a dead-end job proofing subtitles on third-rate videos, Michael has kept his future at bay through a stream of boozy nights or by blowing time in front of his Nintendo.  That is, until he meets Ivy Chase, the smart, pretty pastor’s daughter whose innocent charm takes his breath away.  But Ivy turns out to be much more than Michael bargained for, and in a moment that surprises even him, he makes the decision of his life.
Smart, funny, poignant, and very, very timely, Last Call in the City of Bridges is a Bright Lights, Big City for the new millennium.  With its memorable characters and unforgettable scenes, this insightful look into twenty-first-century America is a book you won’t want to put down.
Published by Braddock Avenue Books
Author Info:
Salvatore Pane was born and raised in Scranton, Pennsylvania. Winner of the 2010 Turow-Kinder Award, his work has appeared in American Short Fiction, The Rumpus, BOMB Magazine, Hobart, and many other venues. He is an Assistant Professor of English at the University of Indianapolis and can be reached at www.salvatore-pane.com.
Add to Cart