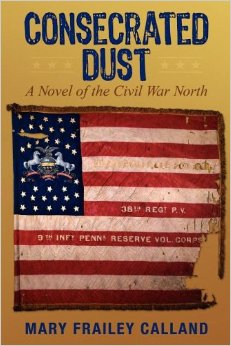 Consecrated Dust: A Novel of the Civil War North by Mary Frailey Calland

SKU:
$20.00
$20.00
Unavailable
per item
Synopsis:
"On September 17, 1862, an explosion at the Allegheny Arsenal in Pittsburgh, Pennsylvania, kills seventy-eight girls rolling bullet cartridges for the Union army. News of the catastrophe is buried, however, beneath the horrendous casualty reports from the Battle of Antietam, fought on the very same day.
Inspired by these two real-life tragedies, Consecrated Dust tells the story of four young northerners - feminist, Clara Ambrose; soldier, Garrett Cameron; industrialist, Edgar Gliddon; and immigrant, Annie Burke - friends, lovers, and bitter rivals. In the teeming streets and factories of Pittsburgh, and on the battlefields of the Army of the Potomac, they struggle to survive, forced to choose between love and duty, sacrifice and greed. Their choices ultimately lead to their presence at both the Arsenal and the Antietam battlefield on that fateful September day, a day that reveals the true meaning of courage - a day not all of them will survive."
Author Info:
Mary Frailey Calland was born in Elmira, New York, and has always had a love of writing and history. She has a B.A. in American Studies from the University of Notre Dame and a Juris Doctor from Notre Dame Law School. Her books focus on American history as experienced, not by the famous, but by the common people of the period. Her previous works include the historical novel, Barefoot In The Stubble Fields. Mary lives with her husband, Dean, in Pittsburgh, Pennsylvania.

Sold Out
Add to Cart